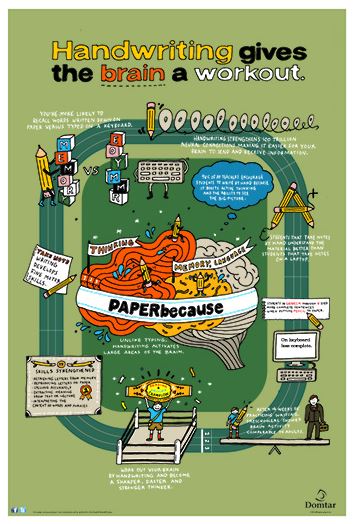 Taking time to put pen to paper can actually increase your learning capability, retention and brain development according to many experts and studies on handwriting conducted over the past few years. While many schools are taking cursive requirements out of their curriculum and the majority of us compose our thoughts and work on computers through keyboards, we can’t let the practice and benefits of handwriting fall to the wayside.

“For children, handwriting is extremely important. Not how well they do it, but that they do it and practice it,” said Karin Harman James, an assistant professor in the department of psychological and brain sciences at Indiana University. “Typing does not do the same thing.”

William R. Klemm, D.V.M., Ph.D. agrees. In an article he wrote called “Cursive writing makes kids smarter” published on March 14, 2013 in Memory Medic, Klemm states that in the case of learning cursive writing, the brain develops functional specialization that integrates both sensation, movement control, and thinking. Brain imaging studies reveal that multiple areas of the brain become co-activated during learning of cursive writing of pseudo-letters, as opposed to typing or just visual practice.

He also believes there is spill-over benefit for thinking skills used in reading and writing. To write legible cursive, fine motor control is needed over the fingers. Students have to pay attention and think about what and how they are doing it. They have to practice.

There are also benefits to the physical aspects of the actual act of writing. Julie Deardorff wrote an article in the Tribune newspaper that outlined the benefits of gripping and moving a pen or pencil that reach beyond communication. She stated that emerging research shows that handwriting increases brain activity, hones fine motor skills and can predict a child’s academic success in ways that keyboarding can’t.

According to an article last year by reporter Chris Gayomali in The Wall Street Journal, some physicians claim that the act of writing — which engages your motor skills, memory, and more — is good cognitive exercise for baby boomers who want to keep their minds sharp as they age. And if you’re looking to pick up a new skill, a 2008 study published in the Journal of Cognitive Neuroscience found that adults had an easier time recognizing new characters — like Chinese, math symbols, or music notes — that were written by hand over characters generated by a computer.

“Handwriting aids memory. If you write yourself a list or a note — then lose it — you’re much more likely to remember what you wrote than if you just tried to memorize it,” said Occupational Therapist Katya Feder, an adjunct professor at the University of Ottawa School of Rehabilitation.

According to Feder in the same Tribune article, handwriting proficiency inspires confidence. The more we practice a skill such as handwriting, the stronger the motor pathways become until the skill becomes automatic. Once it’s mastered, children can move on to focus on the subject, rather than worry about how to form letters.

Handwriting engages different brain circuits than keyboarding. The contact, direction and pressure of the pen or pencil send the brain a message. And the repetitive process of handwriting “integrates motor pathways into the brain,” said Feder. When it becomes automatic or learned, “there’s almost a groove in the pathways,” she said. The more children write, the more pathways are laid down.

So now you’ve heard what the experts say…keep writing! And we will keep paving the way for responsible paper production.