A Record-Breaking Power of Print Seminar

A Record-Breaking Power of Print Seminar

Record attendance and an inspiring array of speakers, provided thought-provoking, credible and informative fresh views. Here are the highlights from the 2016 Power of Print seminar in London.

This year’s Power of Print seminar, was on Tuesday November 1st at the historic Stationers’ Hall. This is an event provided by Print Power, Two Sides, BPIF and Stationers' Hall. The speakers were somewhat more wide-ranging and eclectic than last year, with Wayne Hemingway and Dave Trott on the bill.

First, we kicked off with Charles Jarrold, CEO of the BPIF, and he had some tricky issues to tackle. As a spokesperson for a trade body, neutrality was required, but the BPIF’s research on ‘Brexit’ and its potential echoes were a thought provoking starting point. As with many businesses, he felt that shock and adjustment were the initial reactions. As for the future, only time – and negotiations will tell.

Moving on to slightly less controversial topics, there were some pretty impressive statistics regarding this year’s DRUPA – 260,000 visitors, 1,828 exhibitors and 158,000 square meters of space. That doesn’t sound to me like a dying industry!

Dave Trott challenged the idea often held, that marketing and creative are the same thing, he believes that things should stay simple. In his words ‘If you can’t explain it to an 11-year-old, you don’t understand it, you’re blagging it’. And that creative – done properly creates ‘An unfair legal advantage’.  His assertion that much of the messages we see are not even noticed, let alone forgotten, should be a wake-up call to all of us – the simple diagram below sums up his feelings about the process perfectly. 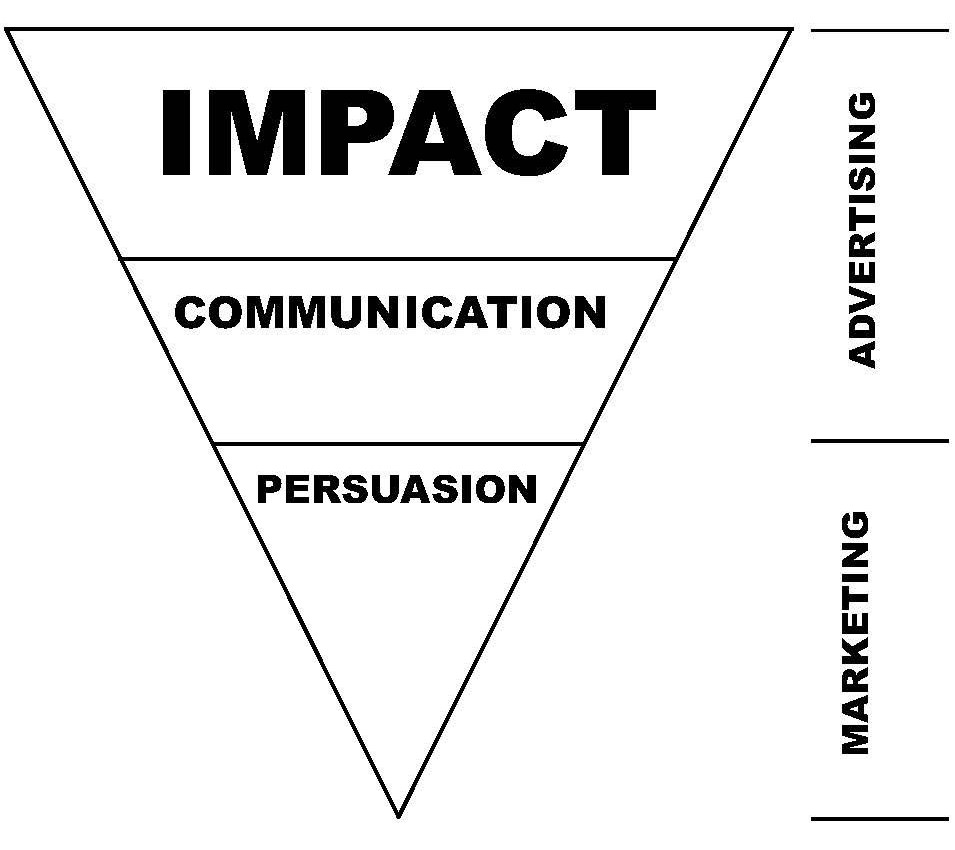 He impactfully demonstrated that the message positioned badly is a wasted message, but positioned well has impact that can’t be beaten. With many examples, some more traditional than others, he pointed out where original thinking – creative – not sales makes the difference.
Asking the room ‘what is the name of the 44th president of America?’ elicited a couple of hands. Asking another question, which had the same answer, ‘Who is the first black president of America?’ of course, the whole room knew. This proves the point in a very clear way that positioning is everything, and that advertising – and marketing – could do a better job at remembering this.

Wayne Hemingway was up next, and carried on the theme, that standing out, questioning and knowing where to fight and where to give up were all important parts of creative thinking. His story of literally rags to riches was a fascinating one – and the truth that social mobility has been forever changed in the face of rent rises, and globalization of corporations was a sobering and for me, who hails from Lancashire, as does Hemingway, quite emotionally challenging thought.

That the current generation of 20 somethings are ‘the first generation that will be worse off than their parents’ is a truth that we should all attempt to address. And he and his company do this through all sorts of ways. The creativity displayed, with a social conscience is quite staggering. His mantra that ‘Design is about improving things that matter’ is a thread that weaves its way through the very DNA of what he and his inspiring businesses do. That affordable housing doesn’t need to look like a prison block – and should actually be affordable, is something that no-one should be able to argue against. And their work to make this a reality is, by the sounds of the stories alluded to but not enough time to tell, a miracle in itself.

Their work with TFL, designing the uniforms, with full input of the staff (80% joined in with the survey – how’s that for an engagement figure?!) shows that utility can be not only practical, but stylish too. And the aforementioned Dreamland – it’s one of my favourite places to be, do visit!

David Gold from Royal Mail highlighted an important issue through their campaign, ‘Keep me Posted’, of businesses ‘greenwashing’ and trying to wipe out the option of paper billing and other communications. Now in its 3rd year, the campaign promotes a consumer’s right to choose how to be communicated to – without excess charging. There are all kinds of reasons a consumer would require paper communications, and this is their right without penalty.

Jonathon Porritt echoed this, pointing out that the carbon footprint of an email versus a piece of DM was almost identical. It’s something that not many people consider. Jonathon also had some pretty serious warnings about the future if we aren’t to change our ways when looking at our carbon future. Looking at our ‘Volatile, Uncertain, Complex and Ambiguous’ environmental futures, his warnings were stark – we need to reverse our carbon usage at a rapid rate if we are to have a secure future on this planet, he says. The circular economy is a key to this, but it’s not enough. He showed that we have 5-20 years left to get this right. 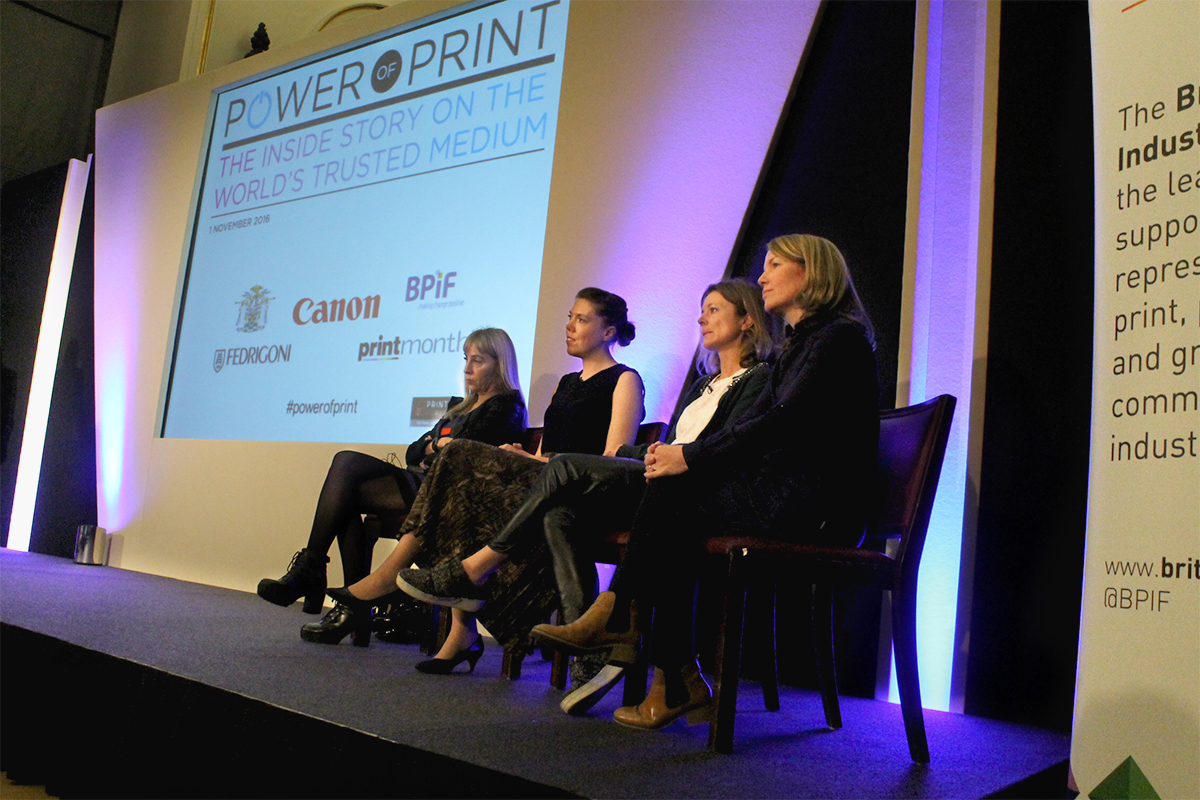 The afternoon brought some exciting ideas from a great range of speakers. Tiffanie Dark of Method, the content agency arm of News UK, highlighted ways in which print was working hard for and in conjunction with their trusted brands. The Times has had 12 consecutive month’s uplift in print sales. The day after the Brexit vote they sold 100,000 extra copies. People still want tangible information in the printed form. They have also launched several new publications – and played with creative ideas for engaging audiences in advertising tie ups with stunning effect.

The new Popcorn magazine, in association with Sky Cinema has a 1.8 million print run, and has been a huge success. Lux magazine is launching in December, a 120pp glossy quarterly aimed at the London and SE market for now, carried with The Times and with plans to expand nationwide. Oreo ran a promotion on the day of the solar eclipse, playfully using the cover of the Sun to create an eclipse of their very own with a full translucent cover wrap – creating a 59% sales uplift. Later in the day the panel discussion argued that digital was more measurable – more immediate – and that’s what marketing directors demand. But I don’t know what is more measurable than a stat like that!

Her presentation of the film offered an insight into a print free future that I don’t want to see.

This lead neatly on to Baroness Susan Greenfield’s in depth lecture regarding the neuro-science behind the effects on brain activity of our daily digital presence versus the physical world. There was so much information in there I can’t cover it all now – it’s worth a book by itself, and indeed there is one. Here, also ironically available on Kindle… She showed in some detail the ways that our brain reacts to stimulus and that unless we use it, we lose it and explored the possibility that over exposure to Dopamine inducing screen time was contributing to increased obesity, anxiety and depression.

It is her belief that screen time is inactive brain time, and that print enables thought leading to higher productivity. Read the book – I’ve already ordered mine.

Kim Willis from Cedar, made an observation I had never considered before. That the now revered Michellin Guide was the first content marketing publication ever produced. And, in the fact that selling tyres meant selling cars, meant creating a need to travel, what better way than showing people great places to eat. It would have got my vote, certainly.

The idea that brands themselves are media owners, with the top of the list of printed magazine circulation in the UK being customer titles, it’s a thriving medium, however, there is still a need to be channel neutral approach. Content needs to be ideas led, not features led and then the engagement will follow, she suggests.

Rachel Aldighieri of the DMA moved on to the hot topic of data. And the astonishing stat that 90% of the world’s data has been created in the last 2 years. She spoke about some fantastic campaigns which have used data in a really smart way to make a difference. The chect.org.uk use of outdoor advertising to demonstrate how a form of children’s eye cancer can be detected is an excellent example of the power of targeting.

The main and constant theme running through the day was that creative needs to engage the customer – and that print still has a vital part in creating that engagement, whether it be the initial spark of interest, the way we follow up a digital communication, or the final product in our hands – print engages and informs us in so many ways that we would miss if it weren’t around. And it’s around a lot more than some would like to think.

Next year's Power of Print seminar is on Tuesday 24th October – SAVE THE DATE!