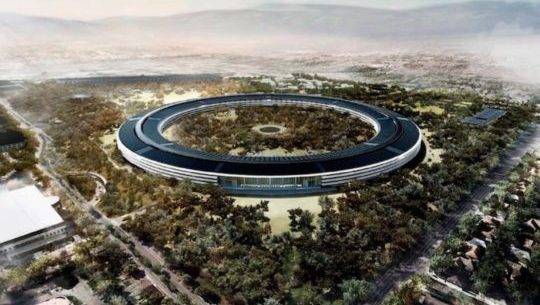 Apple has built a new campus, ‘Apple Park’ in Cupertino, California. It is reported that 80 percent of it will feature landscaping, which is set to include 9,000 trees.

The new structure spans about a mile in circumference and is a single ring.

The entire facility is powered by renewable energy. Solar panels on the roof generate up to 17 megawatts of power, enough for 75 percent of demand during peak times. The rest of the building’s needs are met by onsite fuel cells powered by biofuel or natural gas.

According to a report by Wired in 2013, late Apple CEO Steve Jobs once said that he wanted the campus to remind him of what it was like growing up in California, which he remembered “as the fruit bowl of America.” The company told Wired the goal for this newest campus was to make it “a serene environment reflecting Apple’s brand values of innovation, ease of use and beauty.”

The campus will offer an abundance of fruit to pick from cherry groves, apricot, plum and persimmon trees to the employees along with an apple tree located at the centre of all operations. To prevent outsiders from looking in, a dense surrounding of oak trees encircles the structure.

Apple employees are moving in slowly into their new $5 billion headquarters, Apple Park. The building in Apple’s Cupertino, California hometown will eventually hold 12,000 employees in the giant ring-shaped building surrounded by beautiful trees.