Are North American Forests Really Shrinking? What the Data Tell Us

Are North American Forests Really Shrinking? What the Data Tell Us

Across all environmental issues related to the manufacture of paper-based products in North America, the harvesting of trees for wood fiber is arguably the most familiar, yet also the most misunderstood. Decades of misguided marketing messages that suggest using less paper protects forests along with deliberate anti-paper campaigns by environmental groups that twist scientific facts to suit their own agendas have left many feeling guilty for using products that are inherently sustainable. They are made from a renewable resource, are recyclable and are among the most recycled products in the world, and are manufactured using a high level of renewable energy – all key elements in a circular economy.

So, what’s the most effective way to reverse the misconceptions of those who believe the North American print, paper and paper-based packaging industry is shrinking U.S. and Canadian forests? It’s simple: Show them the data.

The United Nations Food and Agriculture Organization (FAO) has been monitoring the world’s forests at five- to 10-year intervals since 1946. The FAO’s 2020 global Forest Resources Assessment (FRA) presents a comprehensive view of the world’s forests and the ways in which this important resource changed between 1990 and 2020. The data from 236 countries were collected using commonly agreed upon terms and definitions through a transparent, traceable reporting process and a well-established network of officially nominated national representatives. These include the USDA Forest Service and Natural Resources Canada.

Since 1990, there has been a net loss of 440 million acres of forests globally, an area larger than the entire state of Alaska. A net change in forest area is the sum of all forest losses (deforestation) and all forest gains (forest expansion) in a given period.  FAO defines deforestation as the conversion of forest to other land uses, regardless of whether it is human-induced. FAO specifically excludes from its definition areas where trees have been removed by harvesting or logging because the forest is expected to regenerate naturally or with the aid of sustainable forestry practices.

In contrast, despite deforestation by urban development, fire, insects and other causes, total forest area in the United States actually increased and forest area in Canada has remained stable since 1990.  This is due in great part to sustainable forest management practices implemented by the North American paper and forest products industry, the highest percentage of certified forests (nearly 50%) in the world, and laws and regulations aimed at protecting forest resources.

The world has a total forest area of around 10 billion acres or 31% of total land area. More than half (54%) of these forests are in just five countries – the Russian Federation, Brazil, Canada, the United States and China.

Africa had the largest annual rate of net forest loss in 2010–2020 at 9.6 million acres, followed by South America, at 6.4 million acres.

According to the 2020 FRA, the United States and Canada account for 8% and 9%, respectively, of the world’s total forest area.

The North American print, paper and paper-based packaging industry plays a significant role in keeping U.S. and Canadian forests sustainable for future generations, and that’s something to be very proud of.  One of the best ways to show that pride is by taking every available opportunity to bust the myth that the production of paper products destroys forests.  For more facts to help you spread the word, check out our Two Sides fact sheet on Paper Production and Sustainable Forestry here.

BACK TO ALL REPORTS STUDIES 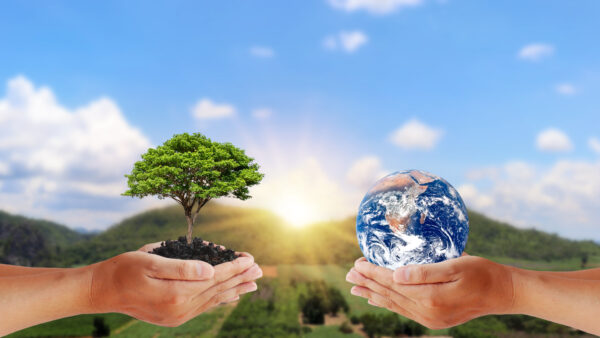