It’s True: Paper Products Are Not a Major Contributor to Climate Change. Here’s Why…

It’s True: Paper Products Are Not a Major Contributor to Climate Change. Here’s Why… 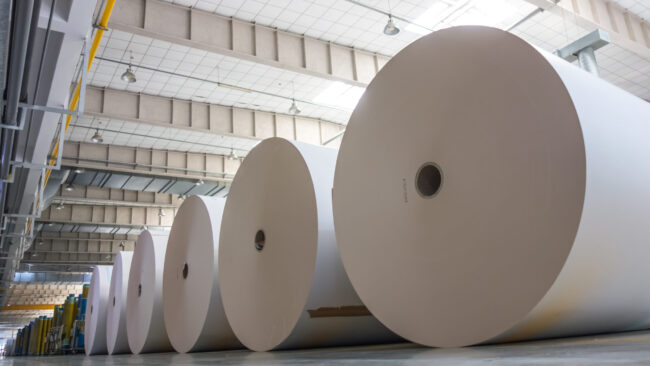 If you’ve been following Two Sides or other authoritative sources, you know that the paper products you use do not contribute in any major way to climate change. Why? Because most of the energy used to manufacture them is generated using renewable, carbon neutral biomass. But what does this really mean?

The life cycle of paper, like that of any other widely manufactured and used product, does involve the emission of carbon – the key element in most greenhouse gases. However, with paper, there’s a critical difference.

Biomass, also called biogenic carbon, is carbon that is absorbed from the atmosphere and stored in trees and other vegetation through photosynthesis. When that biomass later decays in the forest or is burned – either in forest fires or as fuel in a paper mill – its carbon returns back to the atmosphere in an endless natural loop that continuously recycles the same carbon atoms (called the “terrestrial carbon cycle”). Consequently, no new carbon is added to the environment.

On the other hand, the carbon from fossil fuels originates from deposits that have been stored in the earth for tens of millions of years. When coal and oil are extracted from those deposits and burned for energy, “new” carbon from outside the terrestrial carbon cycle is added to the atmosphere. The result is a net increase in greenhouse gases. And that is what’s warming the climate.

In an interesting take on the difference between the two sources of carbon, the U.S. Department of Agriculture compares them to the relationship between landlords and tenants. Biogenic carbon emissions are like tenants who “stay only the duration of their short-term leases, and politely leave over time as the regenerating forest calls them back,” while fossil fuels are “carbon tenants who squat permanently in our home and change the balance we previously had.” 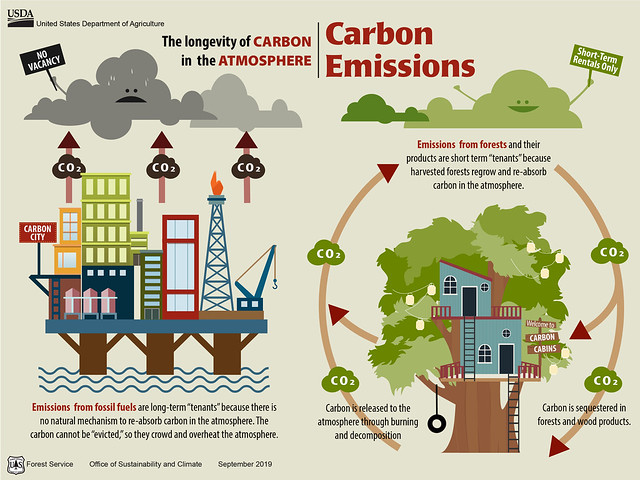 Think about it. Humans have been burning biomass – especially wood – as a primary source of heat for millennia. Yet, as paleoclimatologists have found, not until the industrial revolution, with its massive reliance on fossil fuels, have greenhouse gases begun to increase so dramatically in the atmosphere. Before the widespread use of fossil fuels, the maximum concentration of carbon dioxide equivalent (CO2-e) held steady at a maximum of around 280 parts per million (ppm). Since then, however, that concentration has climbed to over 500 ppm, and it continues to increase.

The work of the national and international agencies and bodies directly responsible for the study, regulation and accounting of greenhouse gases is based on the fundamental finding that fossil fuel carbon, not biogenic carbon, is the problem.  Among these organizations are the Intergovernmental Panel on Climate Change (IPCC), the International Energy Agency, the U.S. EPA and the U.S. Department of Energy, to name a few.

It follows then, that a biomass-based industry like papermaking, which uses and emits mostly biogenic carbon, is not a major contributor to climate change. In fact, that’s what the numbers show. The U.S. Environmental Protection Agency (EPA) and Natural Resources Canada report that the pulp and paper industry in their respective countries is responsible for only 0.5% and 1.2%  of total annual CO2-e emissions. The IPCC states that over the course of a year, the CO2 emissions from the combustion/oxidation/decay of biomass are balanced by carbon uptake prior to harvest, so the net emission is zero. IPCC also states that when used to displace fossil fuels, wood-based fuels can provide sustained carbon beneﬁts and constitute a large [carbon] mitigation option.

It is true that over the life cycle of paper, some carbon is released as greenhouse gases other than CO2. For example, paper that decomposes in landfills releases methane. However, the more paper products are recycled, the less methane is emitted, and paper is recycled more than any other material in the United States. By reducing the amount of paper products going to landfills through recycling, U.S. greenhouse gases emissions were lowered by 155 million metric tons of CO2-e in 2018 – the equivalent of taking over 33 million cars off the road for an entire year, this according to the U.S. EPA.