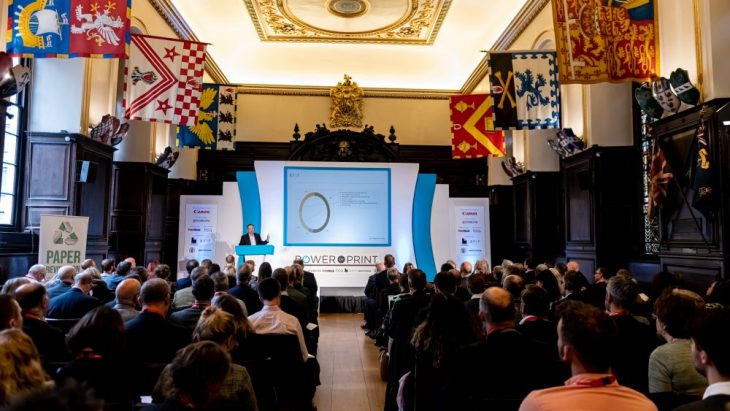 The ninth annual Power of Print seminar was a resounding success, bringing together leading speakers from all corners of advertising, marketing and sustainability.

If there was one unifying theme to come out of the ninth Power of Print seminar it was the continual resilience of print and its ability to offer trust, credibility and a valuable physical experience for readers and customers. Whether it’s magazines, newspapers, books or the many print formats still thriving in an increasingly digital world, the medium has a distinct set of advantages and benefits for publishers, brands and media owners that puts it on a strong footing as we enter the third decade of the third millennium.

Featuring a mix of experts and industry leaders from the worlds of advertising, marketing, publishing, packaging, sustainability and the environment, the seminar provided a 360º view of the print and paper industry and its future prospects, a view that was overwhelmingly positive.

The advertising industry was first represented by one of its leading thinkers, Rory Sutherland, Vice Chairman of Ogilvy UK. Striding around the Stationers’ Hall stage, Rory made a series of points about why brands should spend more money on print because it offers a tangible, human experience. “The value of the marketing mindset lies in taking the human perspective, not the spreadsheet perspective,” he said, using examples of automatic doors replacing real doormen and the value of paper invites compared to email.

Later in the day, Nick Vale, Worldwide Head of Creative Strategy at Wavemaker, described a customer’s interaction with print as having ‘Moments with meaning’, compared to the ‘Micro-moments’ they have with digital media. While micro-moments have the advantage of being measurable and monetized, moments with meaning provide greater engagement, higher quality content and a shared experience, ultimately leading to greater brand success.

The value of print for brands was underlined by Ryan Battles and Zoe Cox of content agency Archant Dialogue, who create and publish HOG magazine for the iconic motorcycle brand Harley-Davidson. The print publication is consistently rated as one of the top benefits of being a member of the Harley Owners Group, and Ryan and Zoe explained how they engage this loyal audience.

Later, Lauren Sutton and Carl Kirby from Waitrose took a deep dive into the stats around the performance of print when compared to digital channels. Using a series of studies, they explained how people are spending more time with print, despite the drop in brand investment, it’s more trusted than digital channels, and it delivers more recall and response than its digital equivalent.

Taking place on the same day that torrential rain caused severe floods in certain areas of the UK, climate change and the sustainability of print was a key part of the seminar, and Professor Mark Maslin provided both the science and the statistics around the increasing threat of climate change.

As a Professor of Climatology at University College London, Mark Maslin is one of the world’s leading experts in global and regional climate change, and he outlined why an increase in flash floods, heatwaves and cold snaps is a direct consequence of global carbon emissions.

“We’ve been putting CO2 into the atmosphere every year for over a century – 80% from industry and 20% from land-use change and deforestation,” he explained. “And it keeps going up. If you look at the data that projects how often we get extreme heatwaves, a temperature rise of 2ºC will result in a heatwave every four years in 2050, but a rise of 4ºC will see them occur every year.”

Of course, Two Sides is highly aware of the threat of climate change and the role that paper – one of the world’s most sustainable materials – has in creating a circular economy in which there’s little waste product. Towards the end of a fascinating day Jonathan Tame, Managing Director of Two Sides UK, outlined the work of the organization, as well as announcing the relaunch of the Love Paper campaign.

Love Paper aims to improve consumer perceptions of print and paper using advertising and content that explains how sustainable paper is, as well as its ability to engage an audience – something many of the speakers spoke about. To emphasize the power and reach of the medium, Love Paper ads appeared in almost every single UK daily newspaper on the same day as the seminar, resulting in over 11 million people seeing one of a series of ads.

With plans to add the Love Paper logo to a wide variety of print products, from newspapers and magazines to office paper and books, the campaign aims to catalyze a new enthusiasm for paper, reminding people of the sheer joy of reading print. On the evidence of today, no one needs reminding.