Tuesday 3rd November saw the annual Power of Print seminar. 160 guests heard from leading industry speakers about the future of print media in a multi-channel world.

Thanks to Angela Derbyshire for this article which was first published on Content Desk. desk.thecontentcloud.net

It seems to have been taken as hard fact for many years now that ‘print is dead’. The ‘dead tree edition’ is often viewed as a laughing stock, but, as discussed at last week’s Power of Print seminar in London’s historic Stationer’s Hall, print isn’t dead – just evolving.

With an impressive array of speakers including representatives from BPIF (British Print Industry Federation), Google, HP, Sky, News UK and more, the word most frequently mentioned was “value”. People place value in things they can own. As Richard Hale of Google remarked: “There is a growing desire to own creative, beautiful things again. Vinyl, books, independent magazine sales are all on the rise.”

The industry itself is in a fairly robust place too. “No one can deny that volume print is struggling,” said Charles Jarrold, CEO of BPIF. “But we still have 122,000 UK employees across 8,600 companies with a turnover of £13.5 billion. We are the world’s fifth largest producer of printed products, only behind USA, China, Japan and Germany.” 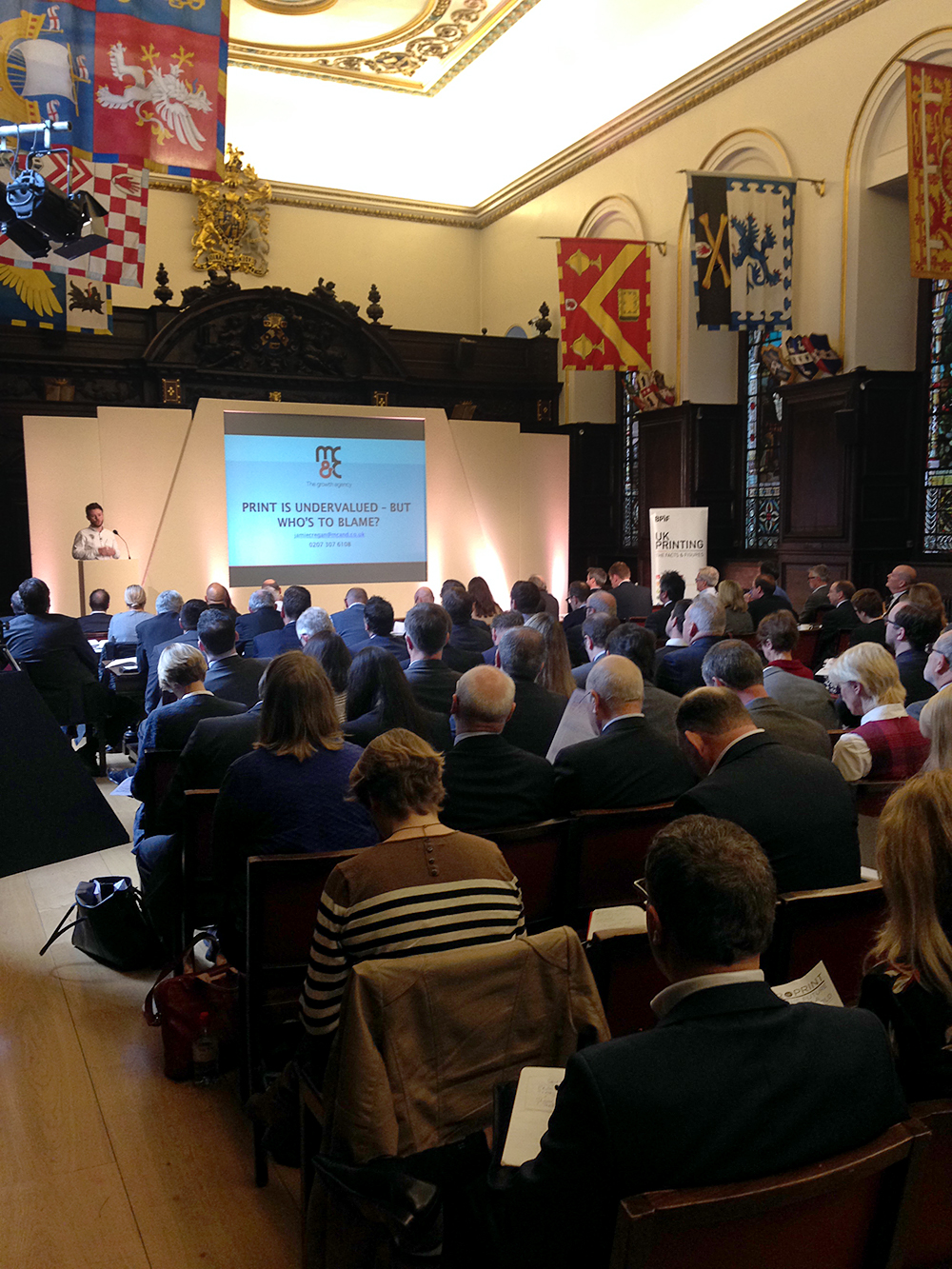 Print needs to get smarter, more integrated and adapt to the changing media landscape. And it seems to be doing that rather well with a plethora of innovation on display. From Coca-Cola using HP technology to produce over 1,000 different names on their bottles, prompting consumers to dig around in shop fridges for a bottle with their name on, then posting the obligatory Instagram picture (admit it, you did, didn’t you?), to Nivea’s recent beach campaign in Brazil where magazines were released with a removable wristband containing an RFID chip that sets off an alarm on your phone if your child wanders outside a safe zone. Pretty smart stuff.

Pernod Ricard also used HP technology, this time to pull on the heartstrings. For Father’s Day they released special edition whiskey bottles. Customers could buy the bottle, go online and upload a personalised message to their Dads. They then received, free of charge, a new label including the message to stick on the bottle.

Pernod Ricard also took a similar approach when working with Progressive and our client YPI (Yachting Partners International) on the launch issue of luxury super-yacht and lifestyle magazine 360°. As lead sponsor of the magazine they were able to use it to take advantage of a whole host of experiential packages during the Monaco Yacht Show where the magazine was launched.

Brands who get print, and use it smartly, really see the benefits.

Mark Davies, managing director of Whistl (formerly TNT Post) pointed out that we need to utilise data to be truly effective. But, there’s a problem. He likened Big Data – the buzzphrase of the moment – to teenage sex. “Everyone is talking about it, everyone thinks everyone else is doing it, so everyone says they are, but actually not many people are doing it!”

Those that do leverage data effectively, however, can yield some stunning results. Direct mail (DM) is the second biggest media channel driver to purchase (31%), second only to TV, and highly-targeted demographic mailings are hugely successful. The charity sector in particular is coming back to DM. Spend is up £50m in 2014 compared to 2005 figures. Davies referred to the “zero moment of truth”, where a consumer recognises a need that first drives them online to search for a product or service. And print advertising/DM is a key driver of awareness.

Creativity and innovation are also pushing new limits in print. Hale showcased some potentially world-changing stuff. For the 2014 World Health Day, ad agency Leo Burnett teamed up with Sri Lankan newspaper Mawbima to impregnate their inks with citronella, acting as a mosquito repellent to help protect against malaria. They sold 30% more papers that day, and increased subscriptions by 300,000. Austrian magazine Vanguardist used inks with HIV+ blood in them to raise awareness of the rise in HIV infection amongst young people.

And finally, back to those dead trees. Martin Wright of Green Futures magazine pointed out that while forest cover is increasing, water use in print is reducing and there is a significant decrease in chemical use across the whole supply chain, data is using more natural resources than ever. The internet represents 10% of the world’s energy use. The precious metals and diamonds in your phone, mined from war-torn countries such as Democratic Republic of the Congo are in higher demand every year. Wright even went as far as to compare the effects on the country to that of cocaine production in Colombia. “So when you say your phone is like crack to you – it’s not as far from the truth as you might think.”

So, next time you pick up a piece of paper, which will probably be within the next few hours, it’s worth pausing to consider: is print really dead, or is it very much alive and kicking?

View the presentations from the day.

The Power of Print seminar was made possible by the following partners: