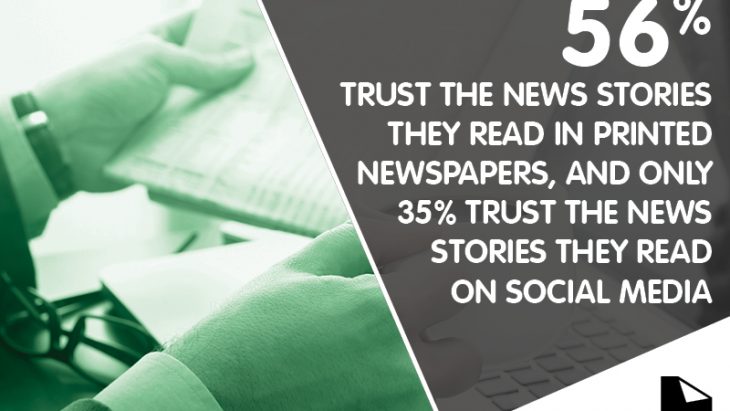 Do you use social media as a news source? Are you sure you can separate fact from fiction?

In January 2018, Farhad Manjoo of The New York Times decided to turn off all his digital news notifications, unplug from social networks, and subscribe to three print newspapers and a weekly magazine.  Manjoo was “…. trying to slow-jam the news… [he] still wanted to be informed but was looking to formats that prized depth and accuracy over speed.”

His experiment to rely mostly on print for news rather than social media taught him several lessons.

First of all, he realized how much of what he had been getting online was not quite news, but “more like a never-ending stream of commentary, one that does more to distort your understanding of the world than illuminate it.” And the commentary tends to precede the facts. Relying on social media for the news may mean that what you read is “what other people are saying about the news, rather than the news itself [and] that makes us susceptible to misinformation.”

Manjoo also realized that it takes time to sort fact from fiction. Time that newspapers tend to take before they report on an event and digital media does not. “Smartphones and social networks are giving us facts about the news much faster than we can make sense of them, letting speculation and misinformation fill the gap…. This was the surprise blessing of the newspaper. I was getting news a day old, but in the delay between when the news happened and when it showed up on my front door, hundreds of experienced professionals had done the hard work for me.”

The third and most important thing Manjoo learned was that “Just about every problem we battle in understanding the news… is exacerbated by plugging into the social-media herd. The built-in incentives on Twitter and Facebook reward speed over depth, hot takes over facts and seasoned propagandists over well-meaning analyzers of news.”

Manjoo’s claim is supported by a new study published in Science by MIT researchers, who tracked thousands of news stories spread on Twitter, which were then tweeted millions of times between 2006 to 2017.  They found that false news spreads more rapidly than real news — and by a substantial margin. The study showed that the spread of false information on Twitter was not due to bots programmed to disseminate inaccurate stories but to people retweeting inaccurate news items. In fact, false news stories were 70% more likely to be retweeted than true stories and it took true stories about six times longer than false stories to reach 1500 people.

The researchers suggest the reason why this happens is linked to human psychology. “False news is more novel, and people are more likely to share novel information… And on social networks, people can gain attention by being the first to share previously unknown (but possibly false) information. “

Among its ongoing woes, Facebook is also concerned about misinformation spreading through its platform and it recently turned to print newspapers to communicate with the people. In advance of the presidential election in Mexico, Facebook took out full-page ads in prominent Mexican newspapers with the title “Tips to Detect Fake News.”  Ten tips are offered such as “Doubt the headline,” “Check the source” and “Carefully observe the URL.” At the bottom of the page, a banner reads, in Spanish, “Together, we can limit the diffusion of fake news.”

As Manjoo sums up “You don’t have to read a print newspaper to get a better relationship with the news. But, for goodness’ sake, please stop getting your news mainly from Twitter and Facebook. In the long run, you and everyone else will be better off.”