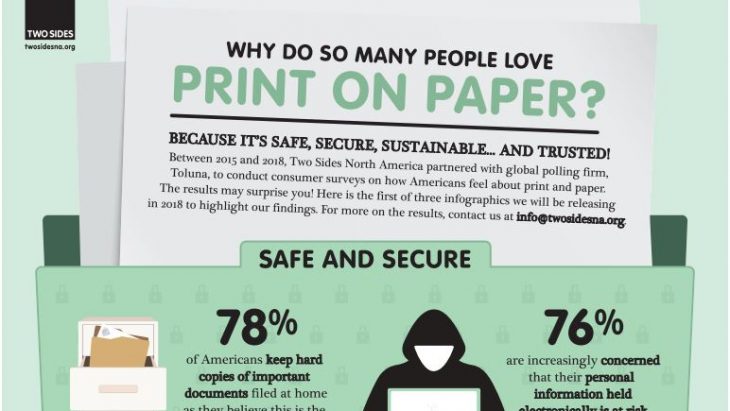 CHICAGO (April 18, 2018) –Two Sides North America has released the first of three engaging new infographics on Why do so many people love print on paper?

The new series of infographics highlights the most impactful results from U.S. consumer surveys conducted between 2015 and 2018 by Toluna, a global polling firm, and Two Sides North America. 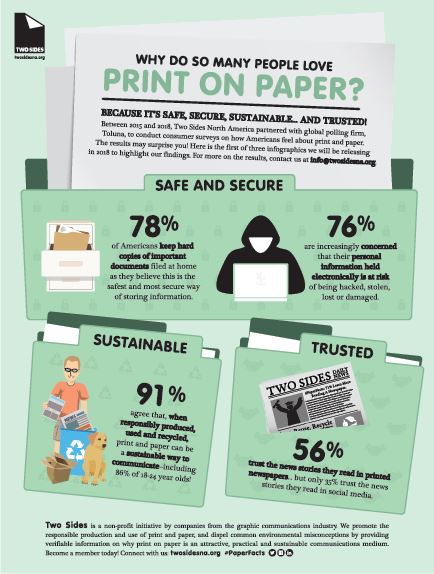 The first of three infographics focuses on the fact that the majority of Americans feel that print on paper is safe and secure, sustainable and trusted.  “Overall the survey results are very positive in favor of print and paper, in some cases surprisingly so.  Although we regularly hear corporations tout going digital or “paperless” as safe, secure and more green – this is clearly not a shared opinion by a large majority of the public who seem to trust paper for many applications,” says Phil Riebel, President Two Sides North America.

The infographic is designed to bust key myths about the switch from paper to digital and further expose unsubstantiated and misleading corporate claims about print and paper, especially those that may appear on Earth Day (April 22nd).  For example, the infographic spotlights key facts, including:

“With the increase in online security breaches and stolen personal information, for example the latest Facebook scandal, the net advantages of print on paper are becoming apparent over digital.  I believe more and more people will become concerned about what may happen to their personal information held electronically.  The number is now 76% of people being concerned…but that may go up even more,” says Riebel.

Two Sides’ new infographic can be downloaded here.  The infographic is also available for co-branding by Two Sides Members, who may contact us for details. The second and third infographics in the series will be available in May and June 2018. 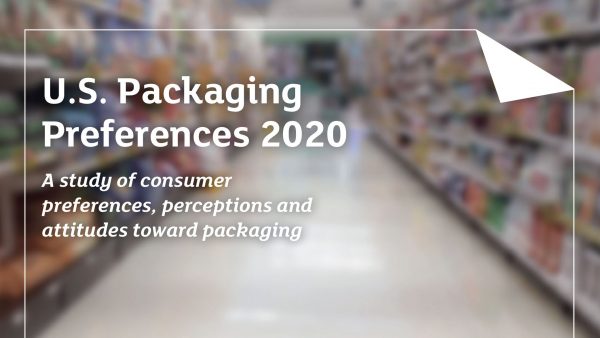