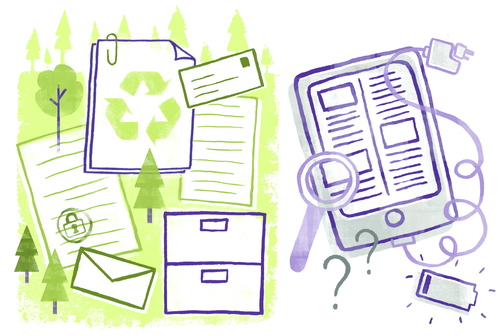 USA Today recently featured the results of a Creditcards.com survey and it’s another example of the social benefits of print and paper:

These results confirm previous Two Sides surveys[1] which identified that 64% would not choose a company that did not offer a paper bill option, and 91% are unwilling to pay for paper bills.

The “why” was also outlined in both the Creditcards.com survey and our 2015 Two Sides survey[2]:

A few additional results from our 2013 survey (soon to be updated) and EMA’s work[3] should be added to this:

The “green” message being used by some corporations to promote electronic services over print media is not swaying many people.  Most consumers know that companies are doing it primarily to save money and it appears a large number of them feel deceived by the environmental messaging.  Furthermore, they like paper for many other reasons such as those listed above.

The typical green marketing message is that the “electronic way” is a “free ride” without any environmental impacts.  However, this perception is gradually eroding due to an increase in media coverage about the environmental and social impacts of our massive and growing electronic infrastructure (see our Fact Sheet on this topic).

Without credible studies on the environmental footprint and cost of their electronic infrastructure (a requirement when making environmental comparisons)[6], corporations should remove “green” marketing slogans that disparage paper and print.  It seems many of their customers aren’t buying it anyways…perhaps because they understand the positive environmental and social benefits of paper, and they want to retain a paper option.

Our most recent survey (to be released soon) has more positive environmental findings relating to print and paper.  Stay tuned!