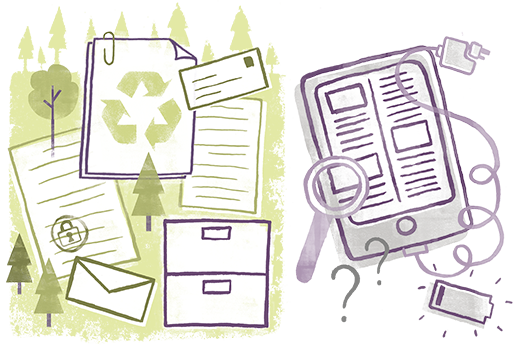 E-WASTE CAN BE TOXIC, IS NOT BIODEGRADABLE, AND ACCUMULATES IN SOIL, AIR, WATER AND LIVING THINGS.

In 2018, an estimated 50 million metric tons of e-waste were generated globally. The U.S. collects approximately 22% of its e-waste.

• It is estimated that there are 3.5 billion smartphones, 1 billion computers, 5 billion to 7 billion other connected devices and 45 billion servers worldwide. The manufacture of a computer requires 240 kg of fossil fuels, 22 kg of chemicals, 1.5 t of water and numerous precious (gold and platinum) or rare earth minerals (tantalum, lanthanum, neodymium, yttrium) as well as those which are dangerous for the environment (lead, bromine, arsenic, chlorine, mercury and cadmium).1,2

• The contribution of Information and Communication Technology (ICT) to greenhouse gas (GHG) emissions could grow from roughly 1.6% in 2007 to over 14% of the 2016-level worldwide GHG emissions by 2040.4 In comparison, the combined pulp, paper and print sector is one of the lowest industrial emitters at 0.8% of the world’s GHG emissions. 5

• Worldwide in 2019, the number of emails sent and received per day totaled over 293 billion.6 With each email estimated to release .000001 metric tons of C02, total CO2 generated by emails globally is about 107 million metric tons of CO2 per year7 or the amount of CO2 produced annually by 23 million cars.8

• A study by Two Sides found that half the leading Fortune 500 telecommunications companies, banks and utilities were making unsubstantiated claims about the environmental benefits of electronic billing. In response, Two Sides initiated a campaign to educate senior executives on the sustainability of print and paper and to encourage them to abandon misleading environmental claims. As of July 2020, 129 North American companies and over 500 globally have removed or changed inaccurate anti-paper claims.